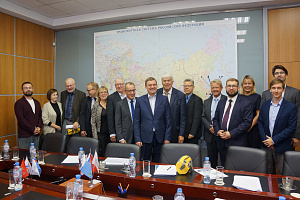 On the 13th of September lead partner of the project «Cycling» the Directorate hosted a meeting with the Head of South Karelia Region Council, Regional Mayor Matti Viialainen.

Directorate’s Director General, Kirill Polyakov, noted that from October on foreigners will be allowed to enter St. Petersburg and the Leningrad Region with e-visa. Russian Prime Minister Dmitry Medvedev approved a list of 53 countries, including Finland, that are eligible. “I am sure that this novelty will increase the inflow of Finnish tourists and I hope that European countries will also come to introduce e-visas in the future”, - he said.

Denis Sedov noted that he finds current cooperation with the Finnish partners fruitful. He spoke about the project aimed at creation of conditions to attract private companies and small businesses to participate in tenders for maintenance of roads in the Leningrad Region as an instrument to boost competition, improve road safety and introduce environmentally friendly practices in rural areas. “We want to adopt a program for elimination of not completed road repairs. We are going to submit it for discussion at the Legislative Assembly of the Leningrad Region and then potentially go to the federal level,” - he added.

Last year, the Directorate completed working on a feasibility study for locating a new approach road from the federal highway A181 “Scandinavia” to BCP “Brusnichnoye” on the border with Finland. This project is highly relevant as this section of the road is a part of the ninth trans-European transport corridor, North-South international transport corridor, and in the future, the Europe-Western China international transport route.

The Finnish side announced that at the end of September an extra selection round will be held in the framework of the South-East Finland-Russia CBC and that the Directorate could submit an application for a grant to develop a land use and surveying plan of the territory, which can be later used by relevant bodies when preparing project documentation.

To conclude the meeting, Olga Potiforova spoke about the work done on the project «Cycling».

In the framework of the project research it was discovered that two international cycle routes pass through the territory of St. Petersburg and the Leningrad Region - EuroVelo 10 (around the Baltic Sea) and EuroVelo13 (from Norway to Turkey). Recently, the Directorate analyzed sections of these routes in the Leningrad Region to determine prospects for connection to Eurovelo network: St. Petersburg - Zelenogorsk, Zelenogorsk - Primorsk, Primorsk - Vyborg, Vyborg - Torfyanovka. The Directorate also drafted recommendations to increase compliance of the mentioned sections with Eurovelo standards.

Summing up the meeting, Kirill Polyakov emphasized great importance and impact of cooperation on other transport projects.
Back to the list