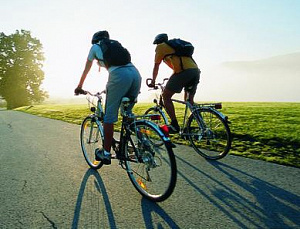 At the meeting representatives of the lead partner, the Directorate, together with GK «Transport Integration», carrying out research work as part of the project “Cycling” within the framework of South East-Finland-Russia CBC program, presented options of prospective cycle routes in border areas of Russia and Finland.

Olga Potiforova, Head of the PPP and External Relations Department of the Directorate, noted that it’s necessary to concentrate biggest efforts on creation of routes that meet all the requirements in order to be integrated into EuroVelo cycle route network in Europe. This could attract a large number of tourists from Europe to the Leningrad Region. The options of cycle routes suggested by the Directorate fall into the zone of popular tourist routes.

Representatives of the project «BizCycle» which is also being implemented in the framework of the South East-Finland-Russia CBC also joined the meeting and shared their opinion on the topics discussed. Following the meeting, the participants agreed to coordinate ideas and actions on development of cycle routes in the border areas of Russia and Finland.
Back to the list